After reading a lot comment on Version 1.2.5. and after the announcement of Visual Studio 2017, we decide to update the entire package.

The Setup have completely changed, the package was not depend anymore of lasted Visual Studio installed on your computer. That's mean two new thing:

How Setup work
Setup was depend now to one variable : "InstallLocation". This one was placed into the registry during the installation.

ESP8266Diag
For the moment any Diagnostic tools was created for this version. P.S. See some bug or need improvement, just reply me!


Open Source
After some comment, I decide to let go ESP8266 Wizard to Open Source. Feel free to modify, but it's gonna be under some rules. Before, let's understand the esp8266 Wizard.

1. Props vs XML vs targets

2.Targets was queue based That's mean, this way was multi-project secure. You can have with another Microsoft project inside same solution. Take care to have unique name for every target, don't attempt to override "Build" target or something used by Microsoft. Also, by include FromminimalBuild.target you can create another builder like example "an Atmel compiler".

3.Windows 10 Partition and Writing Right
If you modify the package on windows 10, be sure that you don't install on same partition that Window 10. The new right of C: Partition, made in sort, that you must start your visual studio 2017 in administration mode. That's a little annoying.

4.The wizard use folder based
If you create a new SDK package. Try to keep in philosophy, that you need two sub-folder to keep compatibility with other project.

6. Put your paw rules
Because XML, PROPS and Targets can't be really compatible with Git or something similar. I mean, you can't keep trace of modification or branch. I ask you to put your paw at specific place to see which package you really install. Like this, we gonna be enable to see which part used during installation and we gonna be in mesure to offer support with specific version name.

Replace OpenSource by your name and change also the version. Change one place and the rest is automatic. 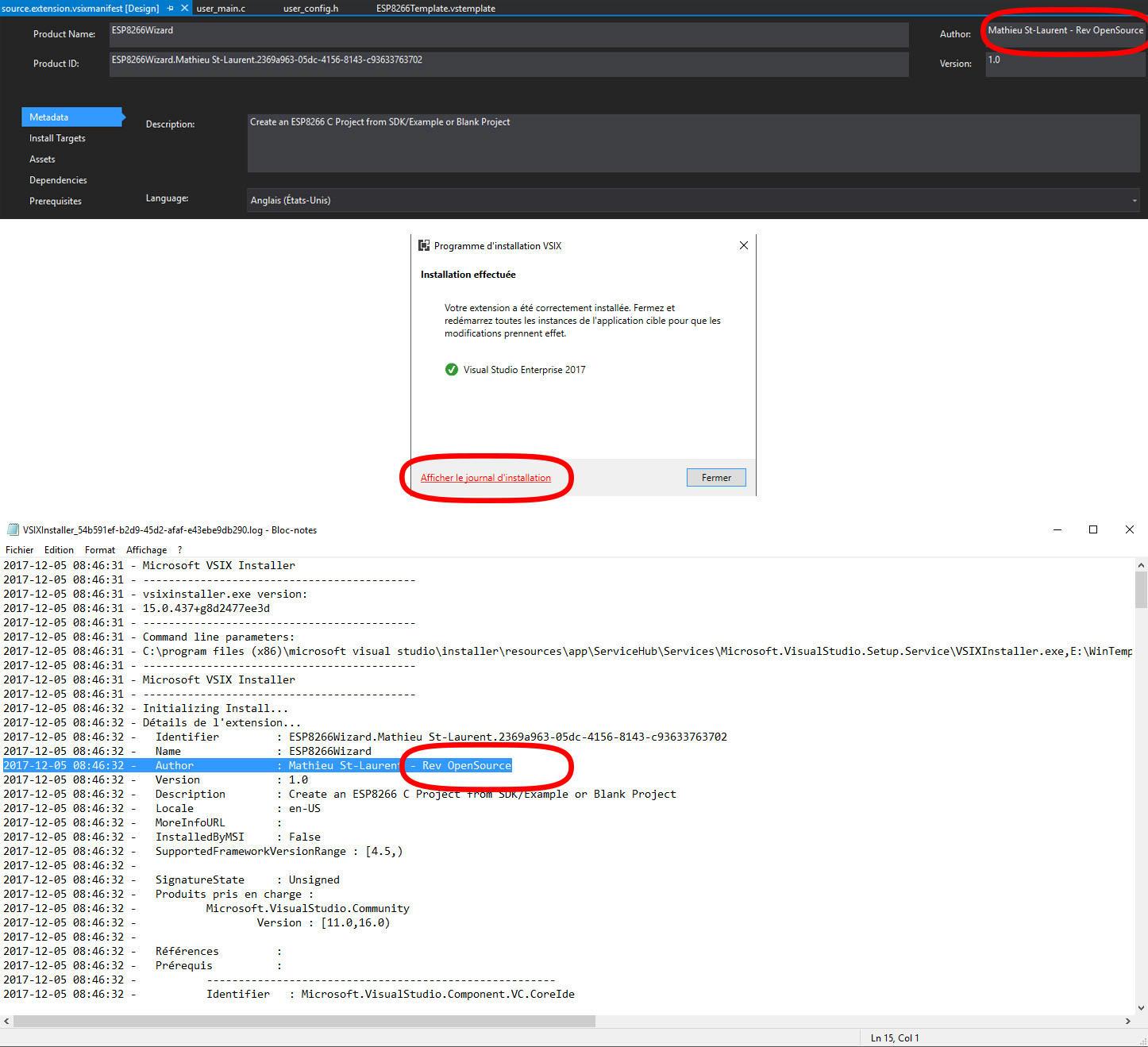 7. Fill the LogBook
Modify the Logbook.txt to include date, package name, coder name and description of update item.

also an option to change the reset mode would be nice (-rnodeMCU or -rck or...)
Thanks
Top

You totally right with the bug. This one check Chip id before programming, that's means if the chips was not detect, this one gonna skip the programming stage.


I must admit, that i really take the thing brief with esp_tool.

A suggestion:
esp_tool is very slow for flashing, could interface with flash download tool instead?
( https://espressif.com/sites/default/fil ... v3.4.4.zip )
it is really fast
Top

I take a look and to do that, i need some thing:
Top

I have another question: How did you make intellisense work? In my visual studio 2017 I can't go to definition get struct field suggestion
Top

lele wrote:I have another question: How did you make intellisense work? In my visual studio 2017 I can't go to definition get struct field suggestion

My fault (project template have error), but you can fix it until i release 1.2.8

I find esptool py version on GitHub, but i hate python.
Also I've find NodeMCU Flasher Pascal version on GitHub. Maybe if i install delphi, i can modify it to fit in command line mode with output display and -nogui flag or something like that.

But for the moment i working to program an Atmega1284p with Chinese isp key, it's for this reason that didn't test ESP programming (need to reinstall my ESP on my protoboard).

Today is my day off, then 1.2.8 gonna be fixed tomorrow.
Top

This tool is almost perfect! Just missing debugger, do you plan to integrate serial gdbstub?
Top

This tool is incredible you made a great work, as a suggestion, is there any chance to add the MESH_DEMO to the supported SDKs and examples?
Top

Have a Solution who can contain multi-project:

Now where i'm in this hell plan?
DirectX GUI Bug Fixed, video not updated but give idea

Now for the serial debugger, I've see some information about this : https://github.com/espressif/esp-gdbstub. The concept, seem to be simple.
Like:

You look, more grounded on ESP that me. Then if you know more and ready to make a test (update package, config Project and a simple test with xtensa-lx106-elf-gdb in command prompt), it can be handful.
Top
Post Reply
27 posts

Users browsing this forum: No registered users and 6 guests